A multimedia exhibition called the Cube of the Universe is currently underway at the Lingang Contemporary Art Museum in the Lin-gang Special Area – located in East China's Shanghai – and will run to Aug 28.

Curated by Huang Yi and Su Bing, 13 interdisciplinary artists – including Andrew Jones, Ding She and Qin Ling – conduct a dialogue through it about the universe and the future.

The 30 artworks vary from videos to interactive installations and paintings. The participating artists are from various backgrounds, including illustrations, animations and gaming.

According to the curators, most of them were born in the 1980s and 1990s and are known to have a great interest in digital and pop art, as well as in crossover media subjects.

Unlike traditional artists, they are comfortable using various apps to create or process their artwork.

New media artists tend to conjure up immersive and interactive experiences. In fact, digital artists are widely seen replacing brushstrokes with the computer mouse and the traditional canvas is being substituted by the computer screen. These artists are trying to narrate their stories through virtual imagination.

Interaction is said to be one of the draws for the viewers.

Whether it is Qin Ling's creation In Line with the Light or Zhu Jingyi's work Peony Pavilion, all of their efforts dive deeply into their emotions. By touching, responding and pondering, these installations endeavor to break the boundaries between viewers and artwork, as the visitors themselves can also be a part of the work. 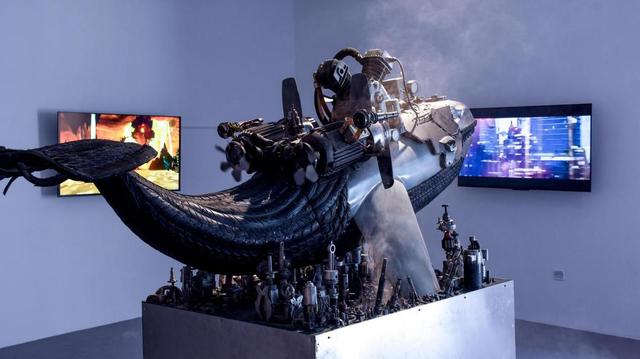 An exhibit displayed at the multimedia exhibition the Cube of the Universe which is currently being staged in the Lingang Contemporary Art Museum. [Photo/chinadaily.com.cn]