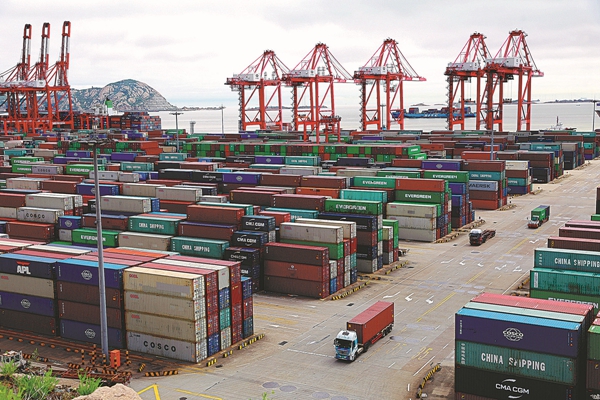 Yangshan Port is maintaining normal operations amid the lockdown in Shanghai. [Photo by Zhu Xingxin/CHINA DAILY]

Despite a complex international situation and given the impact of the COVID-19 pandemic, the Yangshan Free Trade Zone – administered by the Lin-gang Special Area in Shanghai – has encouraged its enterprises to resume production and business in the bonded zone performed smoothly in the first quarter, local authorities said on May 9.

The Yangshan Free Trade Zone recorded an import-export value of 42.2 billion yuan ($6.28 billion) in Q1, up 36 percent year on year.

The average daily container throughput of Yangshan Port in March and April was 66,000 twenty-foot equivalent units or TEUs and 59,000 TEUs, respectively, equivalent to 90 percent and 85 percent of the Q1 average.

The operation of the port was relatively stable during the epidemic period and it is expected to further recover in May, in the wake of more enterprises resuming work and production in late April.

As of May 8, 193 enterprises in the zone had resumed operations and 7,456 employees had returned to work. Eighty-four enterprises had restored their operations to more than 50 percent of their normal capacity.