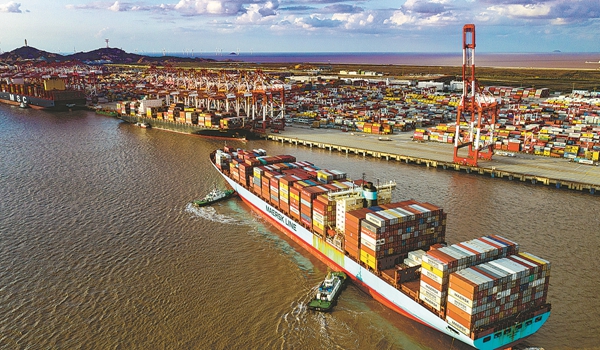 China has freed up the coastal piggyback system for shipping of foreign trade containers between ports within China, enabling foreign logistics giants such as A.P.Moller-Maersk and Orient Overseas Container Line to plan first voyages by the end of this month, analysts said on Monday.

The move highlights China's willingness to further its opening-up policy, they said.

Despite a complex international situation and given the impact of the COVID-19 pandemic, the Yangshan Special Comprehensive Bonded Zone in Shanghai has encouraged enterprises to resume production, and the business in the bonded zone has operated smoothly in the first quarter, the committee said.

"The new service (for shipping of foreign trade containers between ports within China) is expected to help cut the logistics costs for both exporters and importers, improve the utilization rates of container ships, and relieve the tightness of shipping capacity to a certain extent," said Zhou Zhicheng, a researcher at the Beijing-based China Federation of Logistics and Purchasing.

"International relay will allow us to improve services, giving our customers more flexibility and options for their shipments. We are preparing the first shipment in Yangshan terminal in Shanghai, together with the Lin-gang Special Area Administration and other relevant stakeholders," Eskelund said.

Hong Kong-based Asia Shipping Certification Services Co Ltd has been officially approved to carry out statutory ship inspection work in the Lin-gang Special Area as the first inspection agency that is not incorporated in the Chinese mainland.

In March and April, the daily average container throughput in Yangshan terminal reached 66,000 and 59,000 twenty-foot equivalent units or TEUs, each accounting for 90 percent and 85 percent, respectively, of the average level seen in the first quarter.

"Despite the recent resurgence of local COVID-19 cases, operations at ports have been relatively stable. With more companies resuming their business in late April, operations are foreseen to improve further this month," said Lin Yisong, an official of the Lin-gang Special Area Administration.

As of Sunday, 193 companies operating in the Yangshan Special Comprehensive Bonded Zone, or 85 percent of the total, had resumed operations. About half of total employees who work in the bonded zone arrived at their workplaces physically.

China's total imports and exports of goods expanded 1.9 percent year-on-year to a record 32.16 trillion yuan ($4.77 trillion) last year, despite a worldwide slump in shipments due to the pandemic.