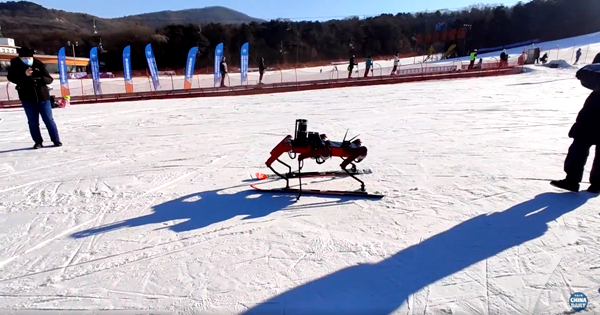 A six-limbed skiing robot attained a speed of more than 36 kilometers per hour over 400 meters on an 18-degree snow track in recently completed tests in Shenyang, Liaoning province.

The robot, made by Shanghai Jiao Tong University, resembles a dog with two additional limbs holding ski sticks. It also completed maneuvers such as accelerating, turning, braking and circumventing obstacles during the tests.

Gao Feng, a mechanical engineering professor who led the team, said the project started in March and was supported by the Ministry of Science and Technology as part of its "High-tech Winter Games" plan.

"This is the first ski robot in China," said Gao, who has been studying mechanics since the 1980s and started to focus on robotics in the 1990s.

"We are one of the institutes that participated in research on biomorphic robots when it was listed in the State high-tech development plan. Although the development period for this ski robot seems short, it was actually based on many years of studies."

The robot showcases many breakthroughs in its key algorithms and can plan its own ski route using technologies such as intelligent perception and braking control. It can be remotely controlled by people up to 2 kilometers away.

The main module of the robot, housing its battery, motor and torque sensors, weighs 1.2 to 1.3 kilograms. Visual and radar sensing units and 5G communication modules were installed on the top of the robot.

Gao said research into skiing robots will help accumulate data and empirical evidence for the study of robot dynamics, because it's difficult for a legged robot to control its speed and direction while moving quickly on a slippery surface.

The speed attained by the robot, which is equal to 10 meters per second, is around the level of a novice human skier.

"Robots that move on wheels can do well on paved roads but cannot cope with complicated environments, such as in mountainous areas and on the moon's surface, and that's where legged robots will have wide application," Gao said.

One of the future applications for the skiing robot would be mountain patrols and rescues in snowy regions, he said.

"Although we are still in the early stages, we hope to develop robots that can do all sports disciplines of the Winter Olympics," he said, adding that the team is also making a robot that can do curling.

Gao said the team plans to organize a performance with the robotics team from Tsinghua University on the sidelines of the 2022 Beijing Winter Olympic Games to promote the major sports event in a high-tech fashion.

"In 2018, the Koreans held a robot skiing competition during the Pyeongchang Winter Olympics," he said. "We want to do a similar one to draw people's attention to winter sports as well as science and technology."