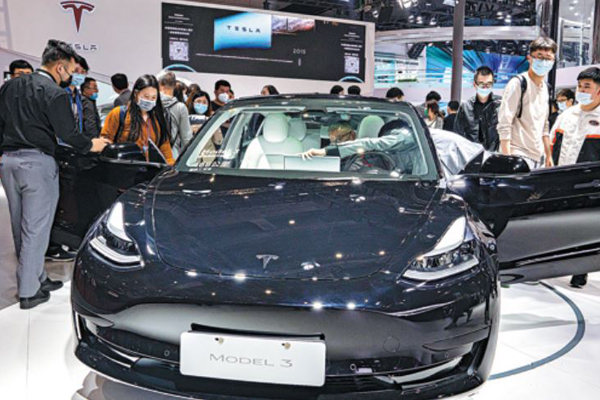 Visitors check out a Tesla Model 3 in an exhibition center in Shanghai's Qingpu district in April, 2021. [Photo by Fan Jianlei/For China Daily]

Tesla's gigafactory in East China's Shanghai city delivered 413,000 electric vehicles in 2021 as of Nov 30, up 242 percent from the same period of the previous year as data shows by the China Passenger Car Association, or CPCA.

Tesla's made-in-China sedans have been exported to countries such as Denmark, Switzerland, Sweden, Spain, the Netherlands, and Norway with a localization rate of parts reaching 86 percent.

In the third quarter of 2021, the Shanghai gigafactory produced more Model 3 and Model Y than the Fremont plant in the US for the first time, boosting Tesla's global delivery speed.