Semiconductor Manufacturing International Co, or SMIC, started constructing a new plant in the Lin-gang Special Area in Shanghai on Jan 1 – in a rapid process that has already broken a record for speed and efficiency.

One of the biggest contract chipmakers on the Chinese mainland, the company benefitted from the know-how and high efficiency provided by the Lin-gang Special Area Administration.

The accelerated pace of the SMIC project is understood to have been a feature throughout the entire set-up process. It took only 190 days from the project getting official approval to obtaining the land and less than a month after that to break ground – setting a record for a project launch time in the Lin-gang Special Area.

The map is marked with works items, related departments, planned dates and completion status, with each color corresponding to different items and divisions. For example, blue means a matter that needs to be discussed with the project company.

Zhang described himself as a "traffic policeman" standing at the crossroads, responsible for coordinating different departments to solve problems. It is understood that there were over 50 coordination meetings on the project last year.

The land transfer announcement for the new factory was posted on Nov 15, two weeks earlier than the original plan – thanks to prompt handling of preliminary development work, especially in powerline relocations.

"This is our first project involving quick relocations", said Zhu Feng, a veteran employee with 22 years of experience in powerline relocations, who added that the efficiency was shown in the bidding period, work such as powerline detection and scheme design has been completed at the same time.

"After the bidding, we quickly removed 5.5 kilometers of old overhead power wires and set up 3.81 kilometers of new ones and 23 utility poles," Zhu added.

The expedited construction was made possible due to an innovative working mechanism jointly established by the Lin-gang Special Area Administration, the company and municipal departments.

"Support facilities – such as temporary roads, electricity, and gas – are the key to guaranteeing the construction once it starts," said Zheng Shiyong, deputy director of the division of construction and transportation management.

The division has received design approval for four municipal roads in the surrounding area. Affordable housing is also in the planning stage. 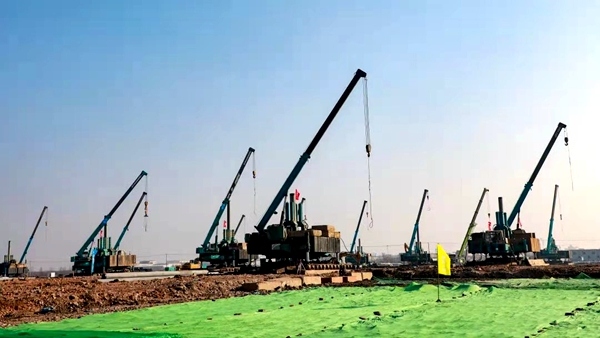 Cranes stand at the ready, at the construction site in the Lin-gang Special Area. [Photo/WeChat account: shlgguanweihui]