The Pudong New Area and the Lin-gang Special Area – both located in East China's Shanghai city – started piloting approvals on Nov 23 for market licenses that are markedly simpler, based on the various commitments of the market operators.

The initiative is understood to be part of wider efforts to delegate power, streamline administration and optimize government services.

The first four companies were granted their licenses on Nov 23 under the new system, which compared with the previous administration has reportedly shortened the processing time by about four weeks.

"In the past, when we wanted to open a new cinema, we needed to apply for screening license, health license, food safety license and other licenses, which needed at least one month," said Yu Bin, manager of the Shanghai Wanda Lin-gang branch.

"Now through the new mode, after signing and submitting the commitment letter, we can get an industry license covering all the license functions on the same day," Yu added

Enterprises participating in the pilot reform are mostly said to be large businesses or chain stores with good credit and their qualifications are judged according to the public credit and industry credit system.

Each commitment letter is divided into two parts – a notice by the administrative examination and approval authority and the applicant's commitment.

Within five working days before the opening of a business, the examinations and approval authorities check whether the enterprise's commitments are compliant. If details are inconsistent, the authorities ask them to rectify them within a time limit.

If the enterprise refuses to do so within the time limit or fails to meet the requirements after the response, the approval is revoked.

In addition, when the administrative examination and approval authorities carry out follow-up supervision, enterprises that violate their commitments will be punished according to the law.

"In the letter of commitment, we promise that the information we fill in is true and accurate… and that we believe we can meet these conditions, standards and requirements," said Xu Wei, manager of Shanghai Belencre, a company that will open a bookstore in Lin-gang this week.

This is the first time the company is adding catering services to one of its outlets, which requires approval for food operations and liquor sales. The relevant standards are specified in the promise book, saving a lot of effort.

Xu said that in the past the company would have handled the process through an intermediary, but now they could do it themselves by submitting materials at one time and obtaining licenses quickly – which not only saved a lot of time and energy, but also saved on costs. 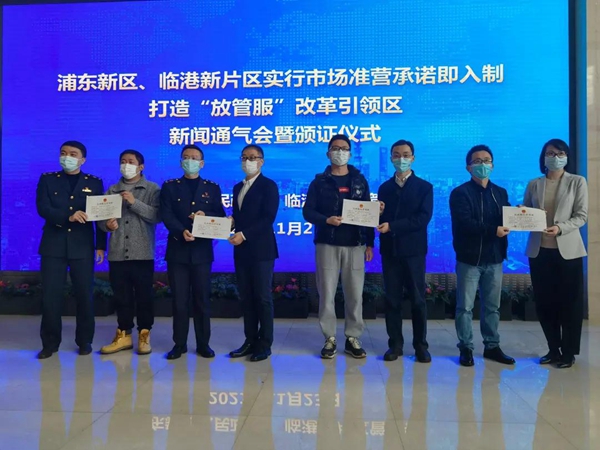 The first group of four companies have their licenses issued under the new measures. [Photo/WeChat account: shlgguanweihui]