The Lin-gang Special Area, a new expansion project tied to the China (Shanghai) Pilot Free Trade Zone, is in the spotlight as it is poised to become the first pilot area for new coastal shipping policies.

According to current regulations, foreign operators are not allowed to engage in domestic shipping business between Chinese ports.

Under the new pilot policy, which was requested by Shanghai and approved by the State Council, China's Cabinet, foreign vessels will be permitted to participate in shipping foreign trade containers between designated coastal ports.

Eligible ships must be wholly owned or controlled either by overseas shipping companies or by the Hong Kong and Macao special administrative regions, according to an official reply to the request, which was issued by the State Council on Thursday.

To begin with, vessels will operate between Lin-gang and the ports of Tianjin, Dalian in Liaoning province, as well as Qingdao Port in Shandong province.

In support of the pilot measure, the State Council has granted Lin-gang temporary exemptions from national regulations on international marine transport and the administration of domestic waterway transport.

The exemptions took effect on Thursday and will run through Dec 31, 2024.

Lin-gang is located in the southeast of Shanghai. With Pudong International Airport to its north and Yangshan International Hub Port to its south, it is a convenient transportation hub with links to sea lanes, airline facilities, railways, highways and rivers.

Its establishment is "an important measure that highlights China's adherence to comprehensive opening-up efforts as it takes the initiative to lead the healthy development of economic globalization in the new era", according to Lin-gang's managing authorities.

It aims to be one of the most competitive free trade areas in the world, and it is committed to the facilitation of investment and operation for overseas companies, the free import and export of goods, the convenient flow of funds, open transportation, the independent work of personnel and the fast interconnection of information, authorities said. 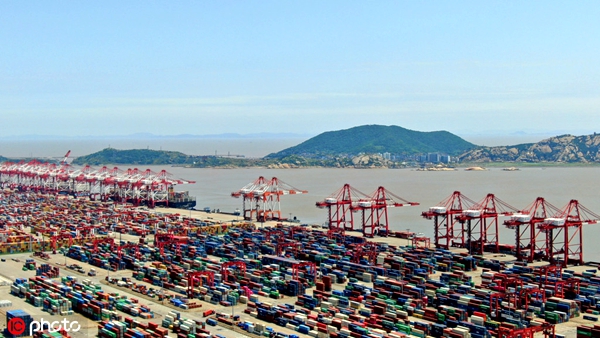 The Yangshan Deep Water Port in south of Shanghai. [Photo/IC]