The State Council, China's Cabinet, on Nov 18 announced the launch of an international cargo relay pilot program at Yangshan Port in the Lin-gang Special Area – located in East China's Shanghai city – in a development considered to be a major step towards opening up the maritime industry in China to more international participation.

The term cargo relay refers to the practice of a shipping line carrying cargo from one port in a country to an overseas destination on its own vessels – and then transferring the cargo from one vessel to another vessel owned by the same company in another port within that same country.

In China, cargo relays have historically been considered solely for domestic transport and are strictly prohibited for foreign carriers.

According to the announcement, cargo relays will be allowed on a trial basis o Dec 31, 2024.

During the period, foreign, as well as Hong Kong and Macao-flagged vessels, will be allowed to carry out international cargo relays at Yangshan port for containers originating from Dalian, Tianjin and Qingdao.

Although detailed implementation guidelines have still to be issued, there are indications that it will provide greater flexibility for carriers to optimize their networks. This is expected to reduce transit times and fuel consumption, enabling a better utilization of assets and allowing carriers to offer better services to customers in China.

Lyu Hongjun, an official with the Division of Yangshan Special Free Trade Zone of the Lin-gang Special Area Administration, said that they had passed on information about the development to the world's top 10 shipping companies and had received a highly favorable response.

Moving forwards, it's expected that these shipping companies will optimize the layout of their international trade networks and design more transit routes at Shanghai Port. 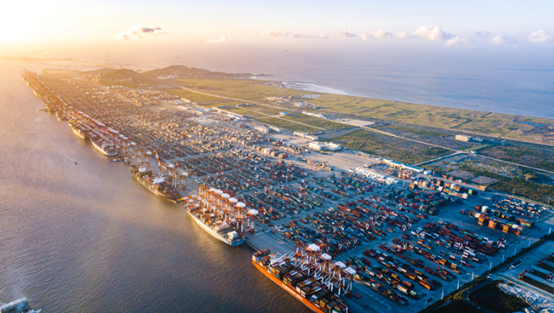