Nanhui to lead innovation and reform for Shanghai

A view of a seaport in the Lin-gang Special Area of China (Shanghai) Pilot Free Trade Zone. CHINA DAILY

Nanhui new town, in Shanghai's Pudong New Area, is expected to expand its role within the Lin-gang Special Area of the China (Shanghai) Pilot Free Trade Zone, as a place of innovation, and a test ground of China's reform and opening-up in the coming years. By attracting a wide variety of high-tech enterprises, it is expected to make more breakthroughs during its development journey with the privilege of piloting more innovative policies and measures.

Nanhui is one of the "five new towns", along with Songjiang, Jiading, Qingpu and Fengxian, regarded as vital factors to Shanghai's fresh growth. The building of Nanhui new town is one of the key development goals in the region. With a total area of 343 square kilometers, Nanhui new town makes up the majority of the Lin-gang Special Area of the China (Shanghai) Pilot Free Trade Zone.

Over the next five years, the town will be developed into an international and futuristic town with high-quality industries, innovation strengths, digital systems and living-friendly space, said Zhu Zhisong, deputy director of the Lin-gang Special Area administrative committee.

For example, it plans to increase its gross industrial output to 500 billion yuan ($78 billion) by 2025 up from its current output of 170 billion yuan, with a more than 25 percent average annual growth rate. The average growth rate of its digital economy will reach 50 percent. The total length of bus routes will reach 50 kilometers, and the coverage of the land for environmental use in the region is expected to reach 55 percent.

To increase its innovation strengths, Nanhui will establish at least 10 international science laboratories, 30 industry innovation platforms and 40 research and development centers with support from both domestic and overseas companies by 2025. It also plans to attract more than 1,000 new high-tech enterprises by then.

Officials also noted that it will continue to reveal new policies to boost innovation and investment.

So far, a large number of projects and industrial parks across different sectors have been sited in Nanhui. They will benefit fields such as digital and intelligent manufacturing, new energy vehicles, lithium battery development and finance.

The construction of Bank of China's Lin-gang Financial Center, located at the West Island of Dishui Lake, is ongoing. A center to support commercialization of scientific results from top scientists is also under construction.

With an increasing number of industrial clusters being created in the region, Nanhui new town is a promising place, officials said at a promotion event held on Sept 29.

The Lin-gang Special Area acts as a test ground of China's reform and opening-up, and such a role will be further reinforced in the coming years, which will support the development of Nanhui new town, officials said.

This year, more than 700 investment projects worth more than 430 billion yuan have been signed in Lin-gang. And five of its industrial parks have been listed among the top 40 city-level characteristic parks.

To gain a competitive advantage and meet future needs, Lin-gang plans to develop a host of industries in cutting-edge areas, such as integrated circuits, artificial intelligence, biomedicine and aerospace industries.

Lin-gang will build three to five industrial clusters each worth around 100 billion yuan by 2025.

In recent years, the China (Shanghai) Pilot Free Trade Zone has explored reform measures to achieve domestic and foreign currency integration of free trade accounts, so as to assist in the international balance of payments. Based on this, Lin-gang further promoted the free flow of capital, and supported the use of funds in the Yangtze River Delta region.

In addition, multinational corporations have been further encouraged to set up global or regional fund management centers in the region. Such a move will help the flow of exchange funds of foreign enterprises.

Since its establishment two years ago, the Lin-gang Special Area has been entitled to innovative policies and priority to pilot more bold reform measures. As a result, its business environment is well recognized.

The business environment of Lin-gang is close to globally leading levels, ahead of developed economies such as Australia and Japan, according to a report released by professional consulting firm PricewaterhouseCoopers on June 12, 2020.

In the report, the evaluation was under the World Bank's Doing Business assessment system with 10 indicators included.

Officials said Lin-gang will continue to improve its business environment with a package of reform measures.

Having the world's most competitive free trade zones in sight, Lin-gang will learn from the experiences of advanced economies and international general principles. It will improve the business environment from the perspective of the whole life cycle of enterprises, officials said. 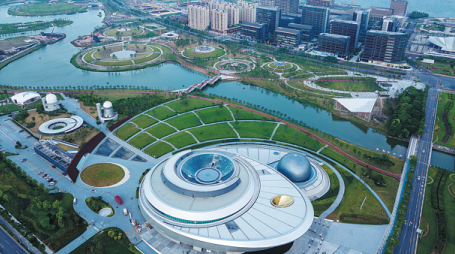