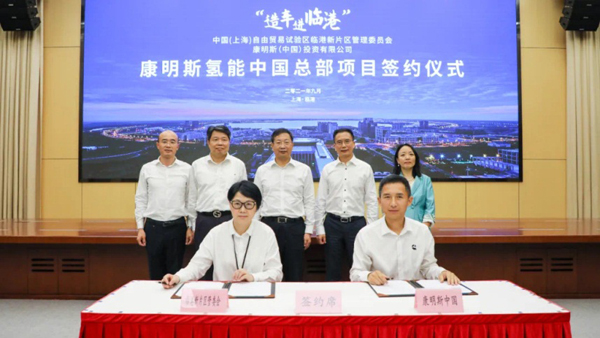 The signing ceremony for the significant Cummins headquarters project in the Lin-gang Special Area is held on Sept 27. [Photo/WeChat account: shlgguanweihui]

Cummins is a US listed multinational corporation that designs, manufactures and distributes engines, filtration and power generation products. Last year it had global revenue of just under $20 billion.

Under the agreement, Cummins will locate its China hydrogen HQ, new energy research and development center and a manufacturing base in the Lin-gang Special Area.

The construction process will reportedly be divided into two phases, with the first phase being put into operation in 2022, while the entire facility when fully ramped up will have an annual output value of 10 billion yuan ($1.55 billion).

"As a world-class free trade zone, the Lin-gang Special Area has a grand blueprint for the hydrogen energy industry, providing a strong and vibrant environment for enterprises to settle there," said Nathan Stoner, chairman of Cummins China, via a video link, at the signing cermony.

The project is the first global 500 headquarters project integrating R&D, manufacturing, trade and a supply chain in the special zone, according to Lin-gang officials.