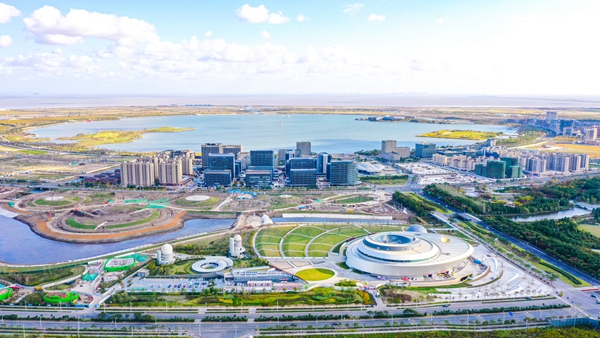 An aerial view of the Lin-gang Special Area of the China (Shanghai) Pilot Free Trade Zone in Shanghai. [Photo provided to en.lgxc.gov.cn]

Lin-gang Special Area, which was included in the China (Shanghai) Pilot Free Trade Zone in August 2019, should see its GDP in 2025 quadruple compared to 2018 with an annual growth rate of 25 percent, according to the Area's 14th Five-Year Plan (2021-25) released on Thursday.

Industrial clusters of new energy vehicles, integrated circuits and high-end equipment should be built in the area, according to the plan. The NEV industry should see its value rise to 200 billion yuan ($30.9 billion) by the end of 2025. The targets for integrated circuit and high-end equipment are set at 100 billion yuan each.

Advanced manufacturing industries such as biomedicine, artificial intelligence and civil aviation should also seek substantial growth in Lin-gang in the next few years, with industry value rising to 80, 90 and 60 billion yuan respectively by the end of 2025.

Several platforms should be set up in Lin-gang to develop cross-border financial services, new-type international trade, modern shipping services, information technology and scientific innovations. At least 50 regional headquarters of world-leading companies and institutions should be in Lin-gang by 2025, per the plan's outline.

All-around opening-up should be further advanced in Lin-gang to reach a higher level, and a system facilitating free trade should be completed in the area. As laid out in the plan, continued efforts will be required to make Yangshan Special Comprehensive Bonded Zone in Lin-gang more competitive globally.

Foreign investment requirements in certain sectors, as well as market entry limits, should be relaxed in Lin-gang according to central regulators' guidance. Experiments can be made to relax or remove the limits on cross-border payment, overseas consumption and the flow of natural persons.