The Shanghai Additive Manufacturing Innovation Center, or SAMIC – located in the Lin-gang Special Area, in Shanghai – has reportedly developed a small 3D printer for the medical industry that is promising transformative change for the sector.

The initiative was in response to the large 3D printer that creates models at an industrial and medical level that require storage in a separate room in the limited space of the hospital, while also needing refrigeration equipment with a constant temperature of 25 degrees. At the same time, the large machines were complicated to use, so doctors had to do special operations training.

Taking these factors into consideration, the SAMIC decided to develop a small version.

They developed the 3D printer with the size of a water cooler in 2020 in Lin-gang. It's met with professional success and currently the machine is being widely used, as far field as in hospitals in Gansu province and also in China's North Inner Mongolia autonomous region.

In addition to printing out medical models, the 3D printer developed by SAMIC is said to be very useful for surgical planning.

Doctors usually compare two-dimensional X-rays or a CT scans when they plan an operation. With the 3D printer, the data from the medical imaging department and the MRI can be transmitted to the 3D printing equipment, which means the nidus – the diseased part of the body – can be seen in 3D form. As a result, it is deemed better for doctors to make their consultative judgments.

In addition, physicians can also deploy the 3D model to conduct remote treatment and guidance, which is great news for patients in regions with poor medical resources. 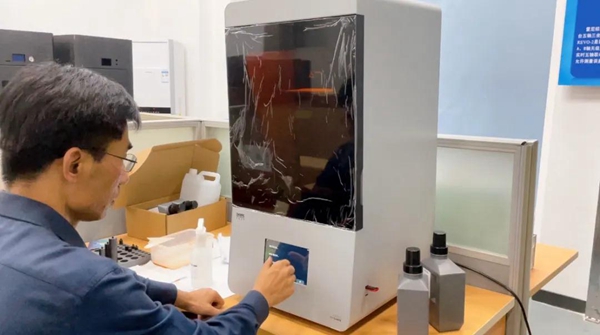 A SAMIC technician demonstrates how to use the 3D printer. [Photo by Zhao Pan]