A satellite named the Rainbowfish was launched into space with three other satellites by a Long March 2C carrier rocket at 8:19 am on July 19 at the Xichang Satellite Launch Center, which is located in China's Southwest Sichuan province.

The device was the first ocean internet of things satellite built by Beijing Guodian High-tech Co Ltd and it was assisted by the Lin-gang company – Rainbowfish Ocean Technology Co Ltd – which participated in the development process.

Rainbowfish Ocean Technology, established in 2014 and located in the Lin-gang Marine Science Park – in the Lin-gang Special Area, in China's eastern city of Shanghai – is a big data high-tech enterprise engaged in the development and applications research of ocean information sciences and technology.

The placing in orbit of the satellite was widely seen as a crowning achievement for Rainbowfish Ocean Technology.

As one of the 38 satellites belonging to the Tianqi IoT constellation, Rainbowfish is carrying out in-orbit technology validation and application tests. After all the satellites are connected to an intranet, the system will provide materials and technologies for IoT application fields without ground network coverage.

After entering orbit, the satellite will be used for data collection and transmissions. It is understood that it will also be used in maritime-related fields such as ocean stereo wide-area observations, marine disaster prevention and mitigation warnings. 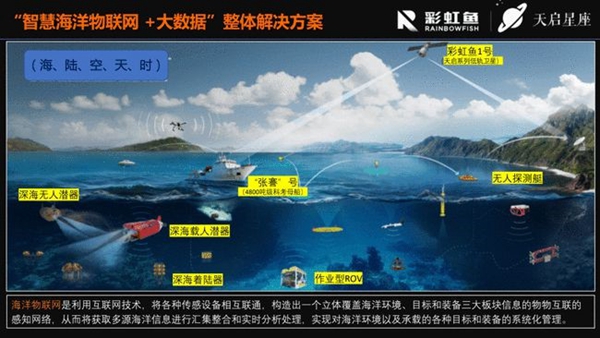