The main section of Lianggang Avenue's upgrade to an expressway recently opened to traffic, which means that for the Lin-gang Special Area – located in East China's Shanghai – a direct 25-minute drive to Pudong International Airport is now possible.

The work was reportedly the first major Shanghai transport infrastructure project carried out in the Lin-gang Special Area after its establishment on Aug 20, 2019.

The main section of the project is 25.9 kilometers long and the construction time was one year and a half – overcoming numerous difficulties such as the COVID-19 epidemic and pipeline relocations.

After finishing the upgrade, the speed of traffic on the road will be increased to 80 kilometers an hour.

The traffic connection between the Fengxian area and the core area of Lin-gang is expected to be opened up as a result and the collection and distribution system of Yangshan Port will also be further improved.

As an important part of Lin-gang's traffic network, the freight transport function of Lianggang Avenue will also be complementary to the G1503 national expressway, which is mainly responsible for carrying passenger vehicles.

In addition to optimizing traffic, it's expected that the connection between the core area of Dishui Lake, various industrial areas and the residential areas in Lin-gang Special Area will also be strengthened. 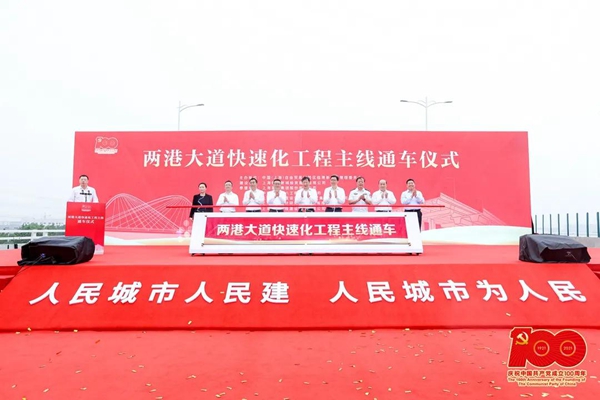 The Lin-gang Special Area in Shanghai hosts an opening ceremony for the upgrade of the main section of Lianggang Avenue to an expressway. [WeChat account: shlgguanweihui]