Shandong Port Group opened a branch in Shanghai on June 21 as part of the company's efforts to be integrated into China's largest economic, shipping and financial innovation hub, as well as promote closer ties with the Yangtze River Delta city cluster. 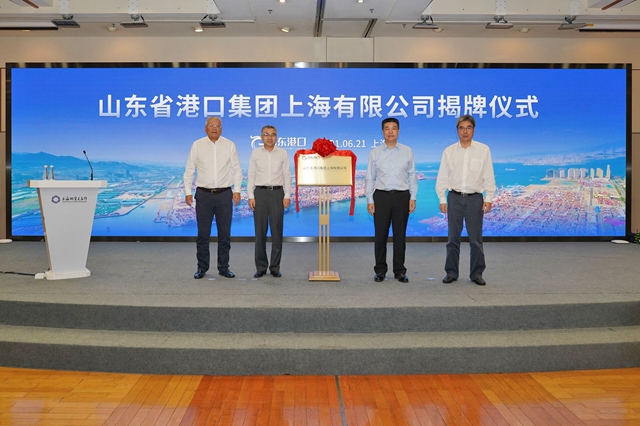 The Shanghai branch of Shandong Port Group is unveiled on June 21. [Photo/dzwww.com]

According to Shandong authorities, the move will help strengthen the province's higher level opening-up and better integrate itself into and contribute to the country's dual-circulation development pattern, in which domestic and overseas markets reinforce each other, with the domestic market as the mainstay.

Shanghai, China's largest economic center, is on the fast track to becoming an international economic, financial, trade, and shipping hub by leveraging its scientific and technologically innovative resources. It is home to many domestic and foreign exchanges, bank headquarters, financial institutions, traders, and shipping enterprise headquarters.

Located in the Lin-gang Special Area, a part of the China (Shanghai) Pilot Free Trade Zone, the Shanghai branch of Shandong Port Group is designed to operate as a regional headquarters.

Li Fengli, general manager of Shandong Port Group, said that the branch will contribute to the company's efforts of building an international shipping center.

"Leveraging policy support and the industrial foundation of the Lin-gang Special Area, we will accelerate the transformation of Shandong Port Group into an international trade regional center, overseas investment platform and international exchange center," said Li.