The Lin-gang Special Area - located in East China's Shanghai city - has started implementing the plan for the new T2 tramline, featuring tram cars with a larger passenger capacity than a bus, in a move to streamline and optimize its transport system.

According to the Lin-gang Special Area Administration, the  public tender for the new line was opened recently and will run to June 28.

The planned route will start from Dishui Lake Station to Shuihua Road Station, which links with the T1 line in the west. It will be about 8.7 kilometers long and eight stations will be set along the line.

Zhu Jianzhong, director of the Division of Construction and Transportation Management of the Lin-gang Special Area Administration, said that they would readjust bus route planning after the tram network completes its construction.

Under the 14th Five-Year Plan (2021-25) for transportation in the Lin-gang Special Area, the area will construct three medium passenger capacity tramlines – the T1, T2 and T6 routes – involving more than 50 km of track.

The T1 line from Dishui Lake to Hongyin Square will open to traffic on July 1. 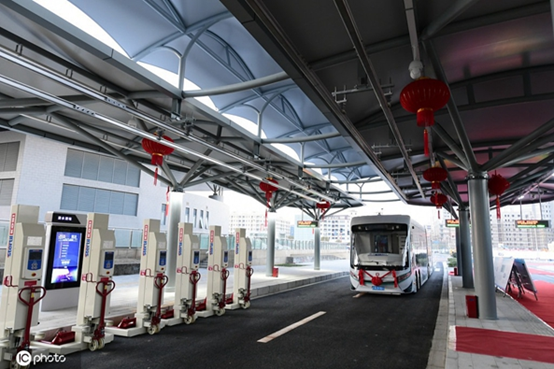 The new Digital-rail Rapid Transit or DRT technology tram stops at the Dishuihu station on the T1 line on Jan 1. [Photo/IC]