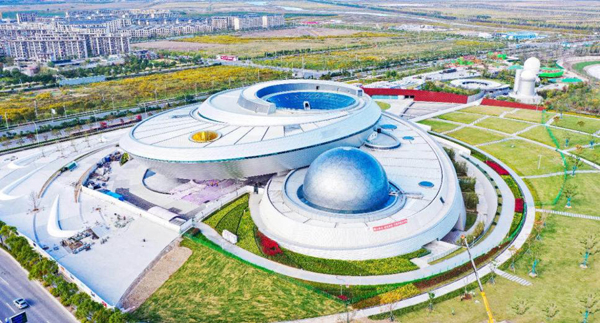 The new Shanghai Planetarium is getting closer to starting operations. [Photo/WeChat account: shlgguanweihui]

A promotions event for cultural and tourism resources in the Lin-gang Special Area was held on May 20 in the area – located in East China's Shanghai city.

Through the promotion of the resources – as well as associated ventures – the event marketed the area's development plans for culture and tourism in the 14th Five-Year Plan period (2021-25), including nine new major tourist routes and 10 key annual cultural and tourism events in the area.

Lin-gang plans to grow its culture and tourism industry with clear development construction pathways, strong local characteristics and a comprehensive layout by 2025. By then, Lin-gang is expected to be an open and innovative, smart and green, vibrant and livable new city, according to officials.

A series of culture and tourism products were unveiled during the event, including a hand-drawn map, ticket packages and commemorative subway tickets.

Around the core landscape of the Dishui Lake in Lin-gang, the map outlined main scenic spots, hotels, cultural and sports venues, business circles, traffic and other information about the area.

More exciting news unveiled at the event was that the Shanghai Planetarium – located in Lin-gang – is set to start trial operations in June.

It is expected to become the most important astronomical science education base in Shanghai and even within the Yangtze River Delta region, an official said.