Nanhui new town in the Lin-gang Special Area in East China's Shanghai is to become an open, international and futuristic town within the next five years, according to an action plan released on April 14.

The Lin-gang Special Area Administration held a conference on April 20 to interpret the plan.

Zhu said that Nanhui new town will be built into a future hub that follows the overall orientation of the integrated node cities in the Yangtze River Delta.

Wu Wei, deputy director of the Lin-gang Special Area Administration, said that Nanhui new town will roundly improve its comprehensive functions during the 14th Five-year Plan period, as well as focus on the high-quality planning and construction of four zones.

The modern service open area will build a tridimensional urban demonstration area featuring the joint development of railway stations and city, space integration, as well as multifunctional and policy innovation.

The Yangshan Special Comprehensive Bonded Area (Luchaogang area) will become a pilot demonstration area for special policies. It will build a dynamic platform for institutional innovation, a high-energy and internationalized industrial system, a more open functional platform, and a spatial layout with efficient integration of resources.

The cutting-edge science and technology industrial zone will be constructed as an industry-city integration area with industry agglomeration. It will also have a good standard of living and be environmentally friendly. 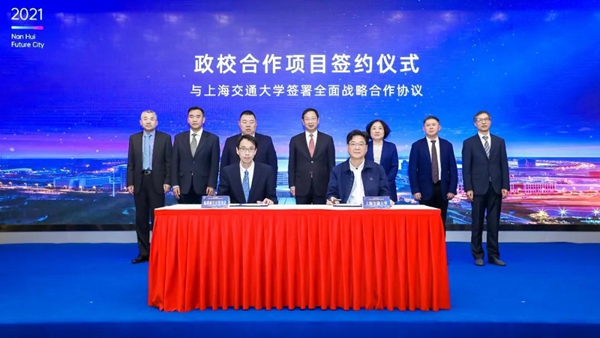 A number of government-school cooperation projects were set up in Nanhui new town on the same day of the conference. 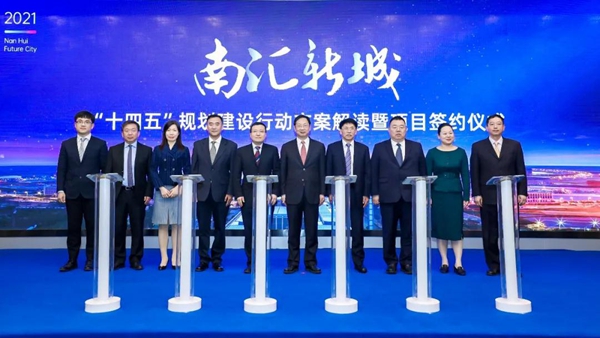 Several companies ink cooperation agreements with the Lin-gang Special Area Administration to set up their headquarters in Lin-gang on April 20. [Photo/WeChat account: shlgguanweihui]

In addition, several companies such as Mengxiang group also inked cooperation agreements with the Lin-gang Special Area Administration to set up their headquarters in Lin-gang on April 20.

In the next five years, Nanhui new town will further highlight its openness and internationalization. It will open up at a high level and on all fronts, and integrate reform systems at a deeper level. It will create a world-class business environment and attract high-quality international resources.