The global headquarters of Highly Marelli Holdings Co Ltd – a subsidiary of the Highly Group - officially started operations in the Pudong New Area of East China's Shanghai on April 18.

Highly, a subsidiary of Shanghai Electric Group, is a listed company on Shanghai's stock market and is the world's leading R&D and manufacturer of core components for white goods and new energy vehicles, as well as cooling and heating-related products. 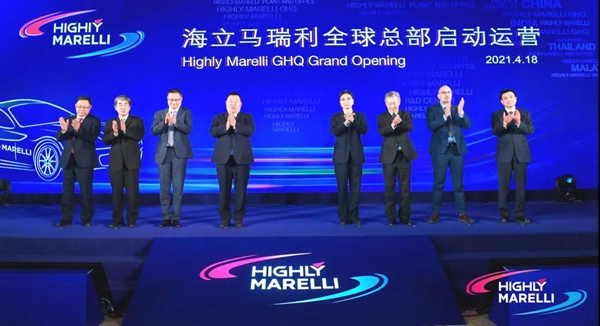 Highly Marelli holds an opening ceremony for its global headquarters in the Pudong New Area on April 18. [Photo/WeChat account: shlgguanweihui]

The company, which manufactures and sells vehicle air-conditioner systems, also released its latest product – a thermal management system for new energy vehicles -- at the opening ceremony.

The system can reportedly significantly improve the energy efficiency ratio of air conditioning, so as to increase the mileage of new energy vehicles in winter.

With its ever-growing product range and strong sales, Highly Marelli has opened a number of factories in Europe, the US, Britain and China.

The Lin-gang Special Area has expanded the distribution of the upstream and downstream parts of its new energy vehicle industrial supply chain, which revolves around the presence of major Chinese auto producer SAIC and others.

It is believed that the opening of Highly Marelli's global headquarters will add new impetus to the development of new energy vehicles and industrial clusters in the area.