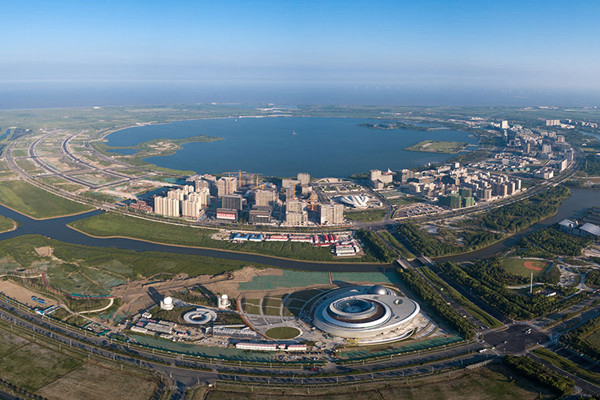 An aerial view of the Lingang Special Area of the China (Shanghai) Pilot Free Trade Zone in Shanghai. [Photo by Gao Erqiang/China Daily]

More education institutions, hospitals and cultural facilities will be added to the free trade zone in Shanghai's eastern coast Lin-gang Special Area by 2035, according to a plan published by the municipal government on Tuesday.

The plan aims to provide high-quality public services to the area and includes projects and policies for education, healthcare, community service and culture and tourism.

In terms of education, the plan features an industry-education partnership and is aimed at attracting three to five China-foreign joint programs for vocational education.

For healthcare, the plan is to introduce to the free trade zone world-class clinics and promote the development of internet hospital service.

Wu Wei, deputy director of the Lingang special area administrative committee, said the Shanghai High School has started building its eastern campus in Lingang. The school will be put into use in 2023.

The expansion project of the Shanghai No 6 Hospital and the building of a public health center in Lingang will also be launched, Wu said.

The plan includes the building of public infrastructures for community-based services such as senior care, sports and culture facilities.

The government will provide more land for projects for the aforementioned fields and encourage investors to use public-private-partnership, bonds and trust to finance these projects.

Chen Shiyan, deputy director of the municipal development and reform commission, said the plan is tailored to the demands of the population and industrial growth in the Lingang special area, which was established as part of the China (Shanghai) Pilot Free Trade Zone in 2019.

The Lingang special area is also a major part of Nanhui new city, one of the five suburban cities in Shanghai that the municipal government aims to develop into independent nodes in the Yangtze River Delta in the next 15 years.