The new production line of Shanghai Xinmi Technology Co Ltd – based in the Lin-gang Special Area of East China's Shanghai city - has been running at full steam since the first workday after the Spring Festival on Feb 18.

The company integrates R&D, design, manufacturing and sales to provide customers in the semiconductor and liquid crystal panel industries with comprehensive products and tech solutions.

The new facility is reportedly the first full process production line in China that manufactures semiconductor perfluorinated sealing products, one of the five major components required in the production of integrated circuits, also known as IC.

Ultra-clean perfluorinated seal rings produced by the production line reportedly show excellent heat and corrosion resistance. As a result, they have increasingly integrated into the IC industrial supply chain since its delivery for service last August.

The Lin-gang Special Area in Shanghai is a major hub for IC development. The IC industrial base there – known as the Oriental IC Port -- was established last October and has since gradually formed an industry cluster covering the whole chain of design, manufacturing, packaging and testing of equipment, materials and chips.

With similar enterprises arriving in the industrial zone, Xinmi Tech plans to increase investment during the 14th Five-Year Plan period (2021-25) -- to build an advanced production line for semiconductor perfluorinated sealing products in the Lin-gang Special Area and enable domestic production of all categories of semiconductor perfluorinated sealing products.

Phase II is expected to start operating in six months and apart from static seal and pipeline seal products produced by Phase I of the project, valve and pendulum valve sealing products will be put into production. 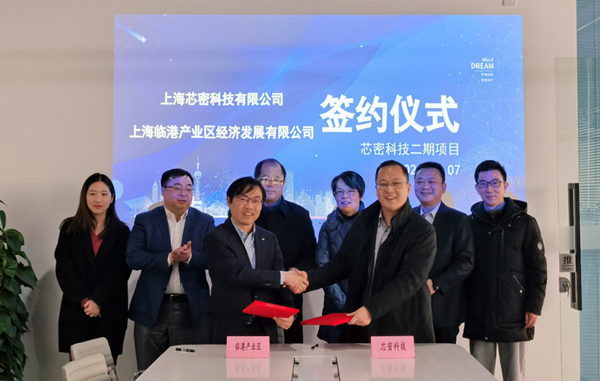 Despite being new to the integrated circuit components industry, Xinmi Tech has become a member of China IC Components Innovation Alliance. The company reportedly has an all-round capability in research, design, manufacturing and selling, making it more efficient compared with similar foreign companies. The company only needs about three weeks to finish the design and production of ordered products, twice as fast as its competitors.

Xinmi Tech chief operating officer Zhang Dong and his colleagues have always been pleased with their decision of to base the company in Shanghai's Lin-gang area. The company not only became one of the first key enterprises to enjoy the preferential income tax policies, but its employees can also benefit from the special talent policy and apply for public rental housing in nearby areas.

He said that from the supply of water and electricity to the implementation of various policies, it only took eight months construction the new production facility there.

"The comprehensive and cordial service of the Lin-gang Special Area Administration and Lingang Group makes it possible for the enterprise to develop and operate smoothly," he said.

"The company will strive to achieve an annual output value of 300 million yuan ($46.5 million) over the next five years and will further expand its market to meet the requirements of the aerospace, petroleum and other industries for perfluorinated sealing products," Zhang added.