On Sept 4, 2019, on the first floor of Lin-gang Special Area Administrative Service Center, Zhang Xubing, held up four certificates, excitedly telling the people around him that the ENN Energy Project in his charge could start construction. 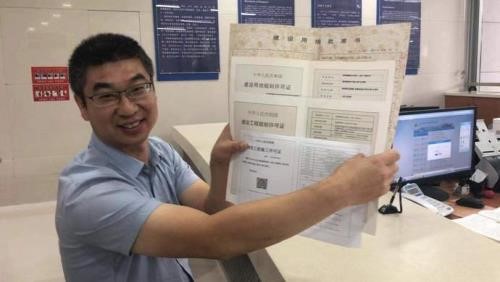 On Aug 29, ENN Energy Power Technology (Shanghai) Co Ltd successfully won the bid for Lin-gang Heavy Equipment Industrial Zone's Land B09-03 (No 201911301). With the help of Lin-gang Special Area Administration, ENN got its construction land planning permit, its permit for the use of land for construction purposes and construction project planning permit in only 21 and a half hours.

When everyone was waiting anxiously, the last and most critical procedure before construction of the project could start, the construction permit, was given to Zhang Xubing at midday Sept 4. It was only five days after the company acquired the land.

"Our existing factory sites have limited our development, so we have great expectations for the project in Lin-gang," Zhang Xubing said. "The faster the implementation, the sooner we can realize commercialized production."

To satisfy the enterprise's desire to start construction as soon as possible, the public servants at Lin-gang Special Area took immediate actions.

On Aug 29, after the State-owned land use right transfer contract was signed, they guided the enterprise to upload the text in time and complete self-service filing on site. In the afternoon, the first construction land planning permit was issued.

At 9 am, Aug 30, the enterprise confirmed its payment for the land transfer in the bank, and the permit for land use was issued. An hour later, the planning permit was issued.

On the morning of Sept 3, the last and most critical permit before construction could start, construction permit, was issued four months earlier than the enterprise expected.

"In this way, we can organize construction right away. We will strive to start construction before October and start production within two years," Zhang Xubing said.

How did they get four certificates in five days?

According to Fu, the administration has granted sufficient authorization and power for examination and approval authority. "Therefore, we can do a lot of pre-work in the project's preparatory phase. Moreover, the project can finish every procedure at our Administrative Service Hall from land acquisition to construction permit issuance and to acceptance checks, forming a thorough and highly integrated service model," he said.

"In the future, all social investment industrial projects in Lin-gang Special Area can obtain all certificates in three to five days after land acquisition, just as ENN Energy did."

Things that used to take six months in the past are now done in five days. This saved costs for ENN, which desperately needs to go into operation as soon as possible. It also broke the suspicion about the "special case handled with special methods" – the Tesla project that once set a new record for administrative approval speed. "Tesla Speed" is not a single case, but the new normal for business services in Lin-gang Special Area.