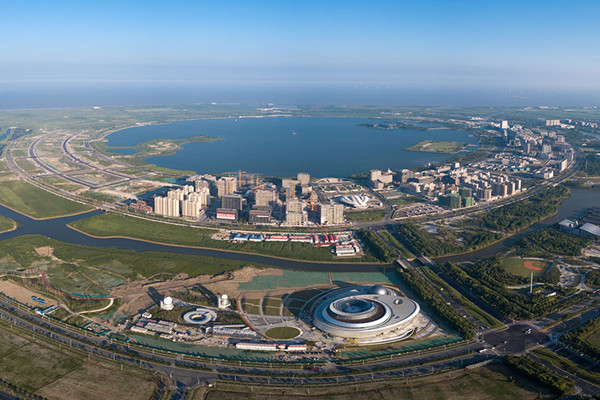 An aerial view of the Lin-gang Special Area of the China (Shanghai) Pilot Free Trade Zone in Shanghai. [Photo by Gao Erqiang/China Daily]

Xi Jinping, general secretary of the Communist Party of China Central Committee, required firm self-awareness, targeted measures and practical actions on Friday to accelerate the country's establishment of a new development paradigm in order to take the initiative in future development.

Speaking at a meeting of the Central Committee for Deepening Overall Reform, Xi said that fostering a new development paradigm was aimed at improving China's capacity to survive, compete, develop and persevere in the face of various kinds of risks that can or cannot be predicted.

Xi, who is head of the committee, highlighted the importance of maintaining an indomitable spirit and strategic focus during this long-lasting process.

To foster the new development paradigm, meeting participants emphasized targeted efforts to solve the key difficulties and problems that have been revealed and required continuous efforts to deepen supply-side structural reform.

They agreed that the satisfaction of domestic needs and the improvement of people's quality of life should be put in a more prominent position and urged more efforts be made on enabling people to feel more satisfied, happy and secure, according to a statement released after the meeting.

Meeting participants required departments and local governments to make targeted efforts to serve the establishment of a new development paradigm, instead of acting at will, without considering the reality and acting just for political achievements.

Talking about the country's high-level opening-up at the meeting, Xi urged greater efforts to make plans for and push forward the high-quality development of free trade pilot zones.

To this end, it is important to fully utilize both the international and domestic markets, to aim at the high-level international economic and trade rules and to actively promote innovation at the institutional level, Xi said.

Since the 18th National Congress of the CPC in 2012, China has launched 21 free-trade pilot zones across the country that have made major contributions to the country's high-quality development, participants in the meeting said, calling for greater autonomy to be granted to the FTZs in carrying out reforms.

The FTZs should be built into zones with international influence and competitiveness, thus taking on an exemplary and leading role in the country's reform and opening-up, they said.

Reviewed and passed at the meeting were a guideline on fostering a new development paradigm, an action plan to boost the seed industry, a plan to protect the environment on the Qinghai-Tibet Plateau and a variety of measures to reform and innovate the facilitation of trade and investment in free trade pilot zones.

To promote high-quality development in plateau regions, meeting participants stressed that people should be put at the center and issues of public concern –including employment, income distribution, education and medical care should be properly dealt with.

They also urged efforts be made to appropriately address and prevent various kinds of risks that relate to national security so as to earnestly safeguard tranquility, unity and development in border areas.