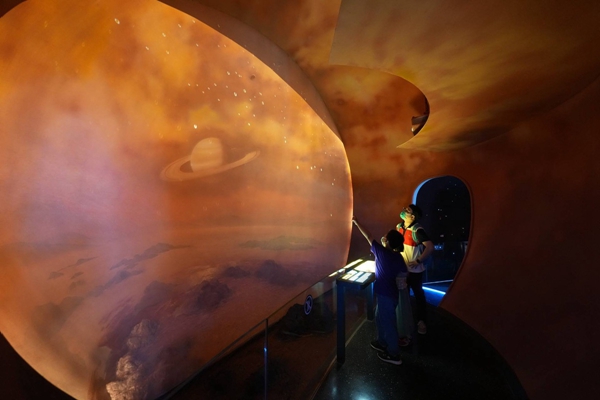 Visitors visit the Shanghai Astronomy Museum, believed to be the world's largest of its kind, on July 5, 2021. [Photo by Gao Erqiang/chinadaily.com.cn]

After nearly five years of construction, the Shanghai Astronomy Museum, believed to be the world's largest of its kind, will finally open its doors to the public on July 18, the museum said on Monday.

From above, the museum resembles two connected planetary orbits, with a spherical theater sitting on one side and an inverted spherical dome on the other.

"The majority of astronomy museums in the world are about 20,000 square meters, so this is arguably the largest in the world. It will be able to host visits by around 6,000 people a day," said Lin Qing, director of the museum's research center.

"We're also looking forward to working with other museums around the world on the popularization of astronomy."

The futuristic building will feature three main exhibitions-Home, Universe and Odyssey-displaying astronomical knowledge, theories about the universe, and the history and current status of human exploration of space.

The museum will use many immersive technologies to engage visitors. Lines showing the distortion of space will appear on the ground as they walk and they will be able to experience roaming on the moon with virtual reality goggles or lie down to watch the starry night sky in the planetarium, which has a diameter of 17 meters.

"We don't want our exhibition to be like a dull textbook. We focus on creating an exciting experience for visitors so that they'll leave the museum with a more curious mind for space and a love for astronomy," said Xin Ge, deputy director of the museum.

Besides interactive experiences, the museum will also exhibit many rare items, including a first edition copy of the first English translation of Isaac Newton's Mathematical Principles of Natural Philosophy-which laid the foundation of modern physics and astronomy. It was published in 1729.

In the meteorites section, a 21.4-kilogram specimen of the Changxing meteorite will be displayed under glass. It fell onto a farm in Changxing Island in the city in 1964 and the piece held by the museum is the largest one.

Xin said the museum will organize stargazing and sun observation activities as it has a 1-meter telescope that is the biggest among astronomy museums in China, and a 65-centimeter solar telescope.

Bai Tao, former president of Qimingxing, an astronomy lovers' society in Shanghai, was among the first to visit the museum during its trial operation on Monday.

"I have visited many astronomy museums and planetariums around the world, and this one is the most modern and impressive," he said. "Its designs and exhibitions combine science and art perfectly, which leaves a feeling of the infinite universe in everyone's heart."

Another test run is scheduled for Saturday. When it's officially open, the museum will operate from 9 am to 4 pm, with entrance tickets priced at 30 yuan ($4.50) for adults and 15 yuan for students.