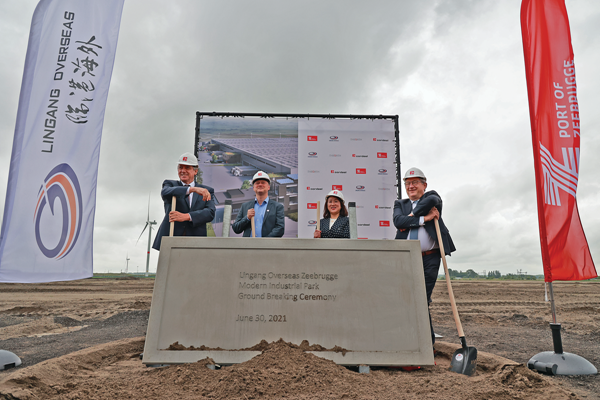 The Lingang Group, the largest industrial park developer in Shanghai, and its Belgian partner, the Port of Zeebrugge, have wasted no time in launching a major logistics project in Belgium as the country lifted most lockdown restrictions amid an improving COVID-19 pandemic situation.

A ceremony took place on Wednesday in the Port of Zeebrugge, to mark the laying of the foundation stone for the Lingang Overseas Zeebrugge Modern Industrial Park.

"The sudden outbreak of COVID-19 in 2020 disrupted the pace of construction of our project, but we have overcome the difficulties together," said Lingang Group Chairman Yuan Guohua. 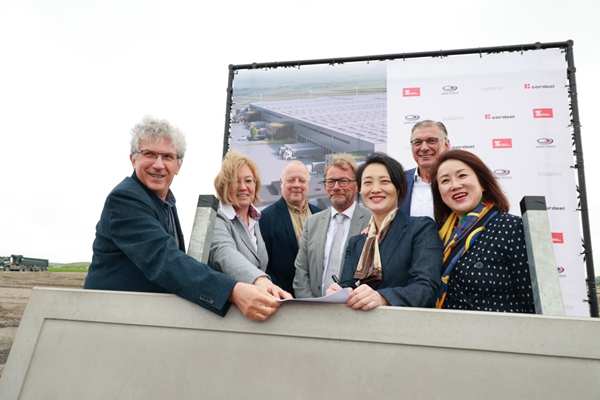 Guests celebrate at the laying of the foundation stone for the Lingang Overseas Zeebrugge Modern Industrial Park in the Belgian port of Zeebrugge on Wednesday. [Zhou Yuchao/For China Daily]

"I believe that today's ceremony will become a landmark event in the history of Sino-Belgian economic and trade cooperation and will make new contribution to the bilateral economic and trade ties," he said in a video message recorded for the ceremony.

The Lingang Group's headquarters is situated close to Pudong International Airport and Yangshan Port, which are among the busiest air and sea ports in the world.

Yuan applauded the cooperation between the two sides over the past three years, since a cooperation agreement was signed in Belgium on Oct 17, 2018, witnessed by visiting Chinese Premier Li Keqiang and the then-prime minister of Belgium Charles Michel, who is now president of the European Council.

While focusing on the cooperation on the logistics park, the two sides also jointly attended the China International Import Expo in Shanghai. Lingang also inked a cooperation deal with Belgium's VIVES University of Applied Sciences, witnessed by Her Royal Highness Princess Astrid of Belgium, who led a big business delegation to China in November 2019.

"I think it's a very, very important investment of the Lingang Group here and the port of Zeebrugge," said Carl Decaluwe, governor of West Flanders, where the port is located.

He explained that this is because the project will create a very important hub not only for the Belgian Flemish market, but also the European market, and as a gateway to the United Kingdom.

"That's very important for the whole of Europe," he said.

Decaluwe added that it is a port "not only to import things from China, but also exporting our good products to China".

"I think it's a win-win situation. And I am very happy that