Yangshan Phase IV, which is the world's biggest automated container terminal, opened in December 2017 and is located at Yangshan Port in Shanghai.

According to data from 21 bridge cranes operating on the same day in the Yangshan Phase IV terminal, the day and night handling capacity of each bridge crane exceeded 1,000 TEUs, an extreme and rare level of productivity in the international ports sector.

The high efficiency was reportedly attributed to two factors – the efficient production organization at the wharf sites and the intelligent controls system, ITOS.

ITOS has been independently researched and developed by Shanghai International Port (Group) Co Ltd, or SIPG.

With ITOS, the automated container terminal at Yangshan port has won some of Shanghai's top awards for scientific and technological achievements. 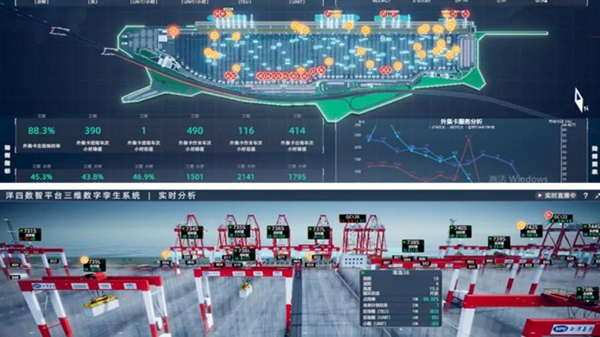 A picture of productivity: the monitoring and analysis screens of the ITOS system.[Photo/WeChat account: shlgguanweihui]

The handling rate set by the main working equipment at the Yangshan Phase IV terminal is said to be two to three times that of other automated terminals in the world, according to an official at SIPG.

With the technology, the per capita labor productivity of the terminal is reportedly 213 percent that of a conventional port terminal.

SIPG conducted the research and development for the intelligent operations control technology of the super-large container terminal.

It is expected that by 2022, the project will complete an R&D upgrade of the intelligent operating system for China's first super-large automated container terminal, with completely independent intellectual property rights. It is projected that by then, the annual throughput of the Yangshan Phase IV terminal will break through the 6 million TEU barrier.