A high-quality sponge city demonstration area will be formed in the Lin-gang Special Area in East China's Shanghai city, according to the new five-year plan for the development of the ecology and environment issued on June 4.

A sponge city is a new urban construction model for flood management - and their rollout in China has been enthusiastically adopted under its the Sponge City initiative. Sponge cities are sustainable water metropolises, designed to absorb and capture rainwater and utilize it for irrigation and domestic use, making it a popular concept in the flood-prone areas of Asia.

Under the Lin-gang blueprint, during the 14th Five-Year Plan period (2021-25), the area will be developed into a park city, a sponge city, a waste-free city, a low carbon city and a well-governed city.

The goal is that by 2025, the annual concentration in the area of PM2.5 – fine inhalable particles, with diameters that are generally 2.5 micrometers - will be stabilized at 30 micrograms per cubic meter.

The other aims are that the proportion of sponge city construction area conforming to set standards will have reached 45 percent, while that of ecological spaces will reach 50 percent, higher than Shanghai's standard.

The Lin-gang Special Area's position near the sea is believed to make it more vulnerable to flooding than other areas. Fortunately, the area has the largest artificial lake in Shanghai - Dishui Lake - with its dense river systems.

Making good use of the internal water network is expected to help improve the city's ability to prevent floods and waterlogging. Building sponge cities is seen as helping to increase urban resilience: the ability of a city to resolve and resist external shocks.

The aim of Lin-gang's sponge city construction program is to raise its flood controls and waterlogging capacity to the standard that they only face bigger challenges once in 20 to 30 years, according to an official at the division of ecology and cityscape management in the Lin-gang Special Area Administration. 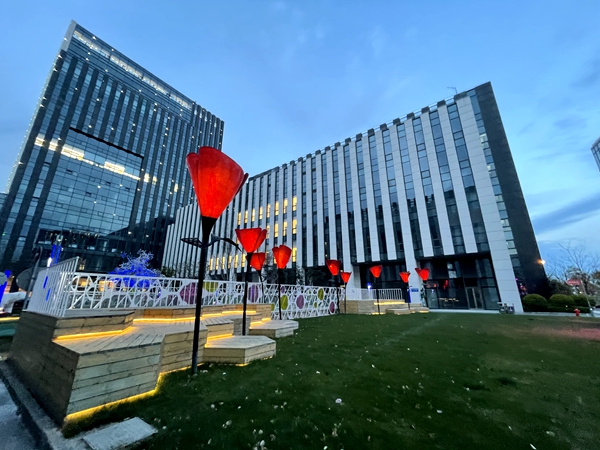 A sponge city exhibition area can be seen at the Lingang Chengtou Tower in the Lin-gang Special Area. [Photo by Wang Jia/chinadaily.com.cn]