Telecoms giant China Mobile announced the start of its Xingyao road tests program to introduce intelligent driving - powered by 5G and high-precision Beidou positioning technology – at the Auto Shanghai 2021 international car show on April 19 and Yangshan Deepwater Port south of the city is a major player.

The program was developed by China Mobile, together with auto manufacturers like SAIC and other industry partners including Huawei and Bosch.

It will complete testing of 1 million kilometers of roads and 100 cities across the country – as well as apply precise all-weather, all-day and all-geographical space-time services in the next three years in the fields of intelligent networks, autonomous driving and car-road cooperation.

As a result, 5G + Beidou high-precision positioning technology will officially enter the stage of large-scale practical applications in China. 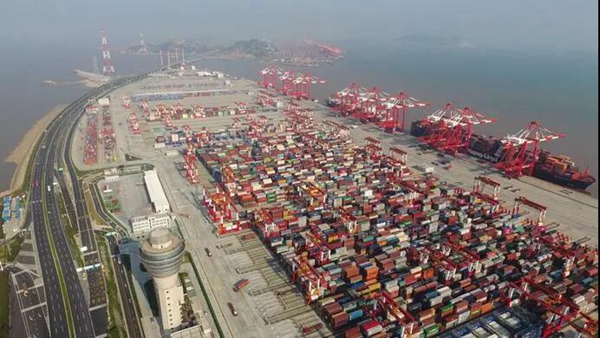 With its 5G + Beidou high-precision positioning technology, trucks can drive automatically in teams in the Yangshan Deepwater Port in Shanghai, making it the first intelligent port to utilize the intelligent driving system in China.

Trucks there can be organized into teams and drive automatically on a 42-kilometer road from Yangshan port to the Luchao Port Storage Yard, via the Donghai Bridge. Even in relatively complex road conditions, the vehicles can automatically load and unload goods within 15 seconds. At the same time, vehicles can autonomously plan a route and accurately go there.

To date, relying on existing 5G base stations, China has reportedly built a vast ground-based network of more than 4,400 augmentation stations, as well as built the world's largest 5G+ Beidou high-precision positioning system.