More tasks related to systematic innovation have been assigned to the Lin-gang Special Area.

The area was officially launched in August 2019 as part of the China (Shanghai) Pilot Free Trade Zone, and it will now be used to facilitate the country's dual-circulation development paradigm.

During a November 2019 visit to Shanghai, President Xi Jinping said systematic innovation and institutional improvements should be undertaken and strengthened in Lin-gang to boost the area's economic quality. In the long run, it should grow into an important hub linking onshore and offshore businesses, he added.

Zhou Hanmin, head of the Shanghai Institute of Socialism and a member of the National Committee of the Chinese People's Political Consultative Conference, recently said more importance should be attached to the development of the Shanghai FTZ, especially Lin-gang.

That would allow experiences of systematic innovation to be promoted in Shanghai and further applied to the Yangtze River Delta region. Only in this way can the FTZ truly grow into a pivot of the country's higher level of opening-up.

Lin-gang has made many experiments with systematic innovations.

In August, the Shanghai Bureau of Finance announced that companies specializing in the manufacture or research and development of integrated circuits, artificial intelligence, biomedicine and civil aviation products in Lin-gang will pay a lower rate of income tax－15 percent－for five years after their founding.

Companies generally pay 25 percent, but the rate is lowered to 15 percent for high-tech companies in designated industries on condition they were founded at least three years ago. In other words, startups are not eligible for the favorable rate.

However, that time limit does not apply in Lin-gang, where companies will be offered a favorable tax rate from the day they are established.

The first batch of 37 eligible companies was approved on Jan 25, providing savings of at least 20 million yuan ($3 million).

Founded two years ago, Shanghai TuSimple Artificial Intelligence is one of the favored companies.

"Faced with the challenges brought about by the resurgence of COVID-19 in some parts of the world, market stability is still affected. Against that backdrop, companies' confidence is boosted when tax is lowered. Not only can they concentrate more on technological innovation, but also maintain a positive outlook," he said.

Those factors will enable TuSimple to develop the application of pilotless logistics services during the next five years, according to Xue.

In addition to TuSimple, 14 other AI companies were granted the favorable tax rate in January. Meanwhile, 18 manufacturers of integrated circuits, three biomedicine makers and a civil aviation company have all been approved for the same tax break.

"The 15 percent rate is not inclusive, because only a limited number of companies are eligible, but it marks a major breakthrough in China's favorable tax policies," said Gong Chun, deputy head of the Lin-gang tax bureau.

The preferential tax rate is just one of many policy advances Lin-gang has made.

The framework plan of the Lin-gang Special Area, released by the State Council, China's Cabinet, in August 2019 specified 78 specific tasks that Lin-gang must accomplish. They include areas such as finance, tax, human resources, fiscal policies, administrative regulation and the legal system.

Seventy-one of those tasks are currently in progress, according to a Feb 24 meeting of the area's administration.

While policies have been introduced to facilitate the development of domestic companies specializing in emerging strategic industries, equal efforts have been made to attract international industry leaders.

By the end of last year, 515 foreign-invested companies were registered in Lin-gang, with the total registration capital amounting to more than $9 billion.

The company's gigafactory in Lin-gang－the industry giant's first such facility outside the US－produced its first cars in early November 2019, just 16 months after Tesla signed agreements with the Shanghai government.

With total investment reaching 50 billion yuan, the factory is the largest foreign-invested manufacturing project in the eastern city.

That speedy introduction was made possible by many new measures. For example, when checking transportation projects, only core materials and guarantees were required when they were reviewed.

To improve efficiency, supplementary documents were allowed to be submitted at a later date, said Han Li, deputy head of Lin-gang's construction and environmental protection department.

"For the Tesla project, we accepted and gave the green light to the construction stages when certain documents were not ready as long as the quality could be guaranteed.

"The only purpose was to reduce time losses due to the lack of materials or other administrative reasons," she said.

Han said these experimental measures were not targeted solely at the Tesla project.

"The purpose is to seek experiences that can be replicated and promoted across a wide area. In this way, Lin-gang can attract more large projects and nurture industries valued at over 100 billion yuan," she said.

The "Tesla model" was promoted all over Lin-gang in March last year, allowing reform related to project examination and approval to be implemented throughout the area.

Meanwhile, industrial land can be used for multiple purposes in the area－the first time such a move has been allowed in Shanghai－and utilities such as water and electricity are provided free of charge to further reduce companies' business costs. Zhu Zhisong, executive deputy director of the Lin-gang Special Area Administration, set the goal for Lin-gang to be "a testing site for deepened opening-up", while more reforms and breakthroughs are on the way to make the area "an internationally influential special economic zone", he said.

As the first facility of its kind in China, the Shanghai FTZ has witnessed many achievements. The negative list mechanism－a major tax breakthrough to facilitate foreign investment－was first implemented when the FTZ was unveiled on Sept 29, 2013.

The mechanism was adopted nationwide in late 2018. While there were 190 restricted items on the 2013 list, there were just 30 on the latest version in July.

For Zhao Xiaolei, director of the FTZ research institute at Shanghai University of Finance and Economics, systematic innovation is not only the highlight of the Shanghai FTZ but, more important, its long-term mission. As China has adopted the dual-circulation model, Lin-gang should formulate responsive measures by giving full play to its systematic advantages. Therefore, industry leaders in the area should play a key role.

Zhao urged high-tech companies with core technologies, brand recognition and mature distribution channels to gather in Lin-gang, adding that they should follow the examples of international leaders by ensuring leading technologies and strong supply chains.

"Opening-up is in Lin-gang's genes. To fit into the new settings of the global economy and trade, Lin-gang should accelerate more systematic changes so China in general can better compete in the global market," he said. 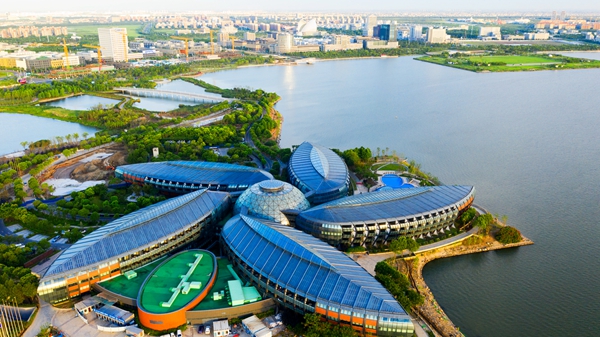 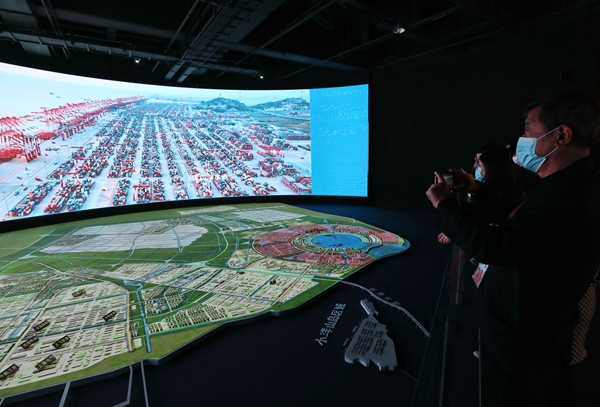 Visitors watch a video about Lingang on an electronic screen in Shanghai. YU JIE/FOR CHINA DAILY