A total of 155 team awards, 10 excellent guide teacher awards, and 10 excellent organization awards were issued. Sponsors such as Huawei, Synopsys, and ASE have also handed out their own awards.

The competition has been held for the past three years, with the previous two events being held in Xiamen, Fujian province and Hangzhou, Zhejiang province, respectively.

Since the competition began in May, a record 480 teams from 86 research institutes across the country have participated. 152 teams have qualified for the finals.

Award certificates for the competition can be used as an "award certificate for the highest academic degree", which will help non-Shanghai university graduates apply for a Shanghai hukou (urban household registration).

The organizing committee also organized a recruitment fair and high-end talent summit for the IC industry on Oct 9-10. More than 50 well-known enterprises in the IC industry attended the fair. 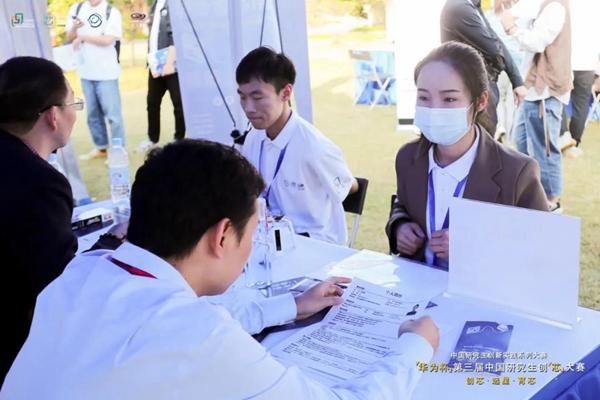 Two postgraduates are interviewed at the recruitment fair, a supplementary event for the finals of the third "Huawei Cup" China Postgraduate IC Competition, on Oct 9. [Photo provided by the CPIPC organizing committee]