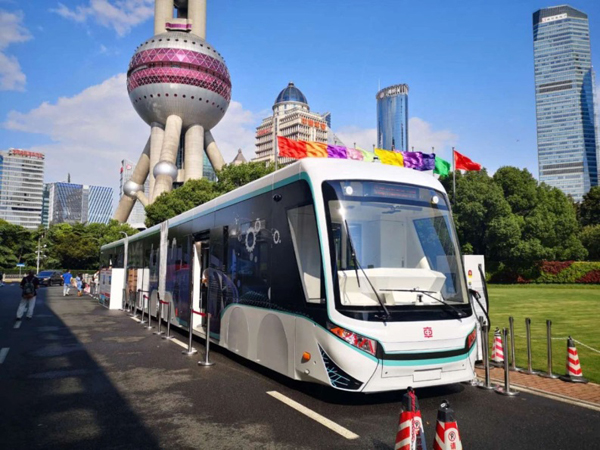 Shanghai Shentong Metro Group, China Railway Rolling Stock Corp (CRRC), Bombardier and other leading enterprises and research institutions in the industry  brought their own hit products to the event.

One highlight was the world's first digital rail-guided rubber-tired tram, or DRT, designed and manufactured by CRRC, which made its debut there.

CRRC officials said the tram will be put into trail operation on the medium-capacity transit system in Lin-gang Special Area of China (Shanghai) Pilot Free Trade Zone by the end of this year.

According to Zhang Chi, an engineer from CRRC, the DRT has many advantages for the Lin-gang transit system.

Sensors on the tram can collect information from magnetic markers on the road surface, which help guide the vehicle's position in real time and control the direction of the rubber tires, Zhang explained.

"There is no need to lay a track on the ground, which can greatly reduce the operating costs of urban transport and will not affect the passage of other vehicles," Zhang added.

Each tram, which consists of three cars, is 30.5 meters long and has a maximum speed of 70km/h and a carrying capacity of 302 passengers.