The policies to protect and promote market competition were made by the Shanghai Municipal Administration for Market Regulation and the Lin-gang Special Area Administration.

The policies respect the competition law of the market economy and give full play to the decisive role of market mechanisms in resource allocation.

The State Administration for Market Regulation has recently allowed Shanghai to carry out the pilot scheme in Lin-gang.

The 11 policies include anti-monopoly "special drugs" and "vitamins" to stimulate market vitality, according to Wang Zheng, deputy director of the anti-monopoly office of the Shanghai municipal market regulation administration.

For example, article 1 in the new policy bill lays out an anti-monopoly review system for market players.

Previously, applicants had to go to travel to Beijing to submit paperwork.

In the future, this review will be able to be completed in Shanghai and the process will be optimized, saving much time and money for enterprises.

Article 3 in the bill discusses the creation of a fair competition review mechanism including a third party evaluation.

A joint review system for major policy making will also be established to eliminate and abolish provisions restricting competition.

Article 11 advocates the promotion of fair competition, and Shanghai is expected to issue the first national competition compliance standards soon.

The 11 policies are expected to improve competition, create a more market-oriented, law-based, and international business environment, enhance market vitality, and further open up the economy, according to the administration's study. 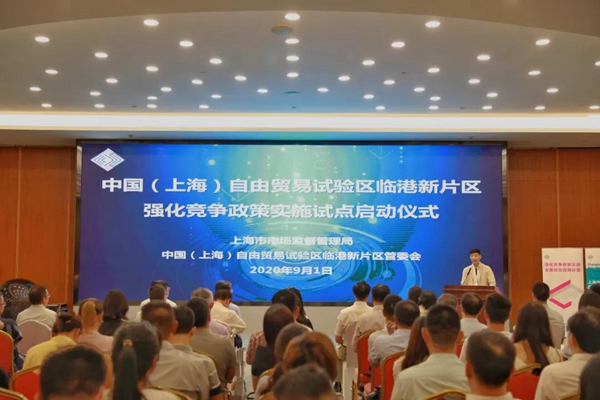 A launch ceremony for the new competition policies is held in Lin-gang Special Area on Sept 1. [Photo/WeChat account: shlgguanweihui]