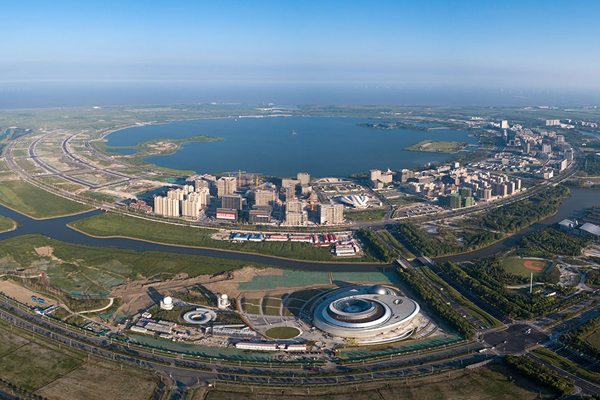 An aerial view of the Lin-gang Special Area of the China (Shanghai) Pilot Free Trade Zone in Shanghai. [Photo by Gao Erqiang/chinadaily.com.cn]

During the first seven months of this year, the total fixed asset investment registered in Lin-gang rose 32.8 percent year-on-year, while the total industrial output increased by 26 percent from a year earlier.

Meanwhile, the deepened reforms carried out in Lin-gang has helped attract more resources and investment. A total of 358 projects have been signed so far, with the total investment value amounting to 271.3 billion yuan ($39 billion).

Industry leaders such as the STAR Market-listed Shanghai Junshi Biosciences Co Ltd and Wuxi Apptec Co Ltd have also agreed to make investments in Lin-gang, which has often been touted as the new frontline of China's reform and opening-up.

The opening-up of the financial sector has also proven to be a boon for Lin-gang's development, said Li Jun, deputy head of Shanghai Municipal Financial Regulatory Bureau. For example, the Shanghai head office of the People's Bank of China had in early March started to offer a favorable policy regarding cross-border renminbi settlement for companies. By the end of June, 66 companies based in Lin-gang have benefited from the policy.

Zhu Min, deputy director of the Shanghai Municipal Development and Reform Commission, said that Lin-gang has a special role to play in the country's new development pattern which takes the domestic market as the mainstay while allowing domestic and foreign markets to boost each other.

He noted that Lin-gang can also help to lead the upgrading of local companies while bridging the domestic and overseas markets.