The zone is conveniently located near a robust integrated transport system composed of waterways, airways, railways, highways, inland rivers, and a subway. 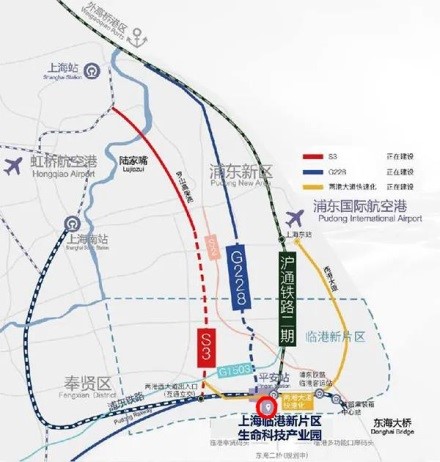 It has a total planned area of 4.5 square kilometers, and two million sq m of property space are available for biomedicine projects.

The first factories in the zone have already been constructed, and several biomedical and medical device enterprises have signed and set up operations; some have even began production.

Shanghai Junshi Biosciences is currently operating in the zone. According to Feng Hui, chief operations officer, the company currently has 21 production lines for biological products and small molecule drugs under development.

Shanghai ZhenGe Biotechnology Co Ltd, which has agreed to set up operations in the park, has started construction on a 10,000-square-meter GMP factory.

Chen Jianxin, CEO of ZhenGe Biotech, said that the new factory will be equipped with world-class R&D devices, including a complete set of small trial R&D and pilot production equipment and various analytical instruments. A 60,000-square-meter biomedical commercial production base will be built in the future.

"Our company plans to invest more than one billion yuan into the construction of the biomedicine GMP commercial production base," Chen said.

Shanghai Stroke Medical Technology Co Ltd is a medical device enterprise that will soon begin operating in the zone. The company plans to build its medical headquarters and industrial base in Lin-gang Special Area, according to Wang Guohui, founder of Stroke Medical.