The S2 Hulu Expressway (connecting Shanghai to Luchao Port new town and Yangshan port) and Lianggang Avenue are gradually filling up with heavy trucks loaded with cargo and shuttle buses for employees.

This is because Lin-gang Special Area is gradually resuming operations.

95.4 percent of firms in the area have already begun operating, according to data recently released by the Lin-gang Special Area Administration. 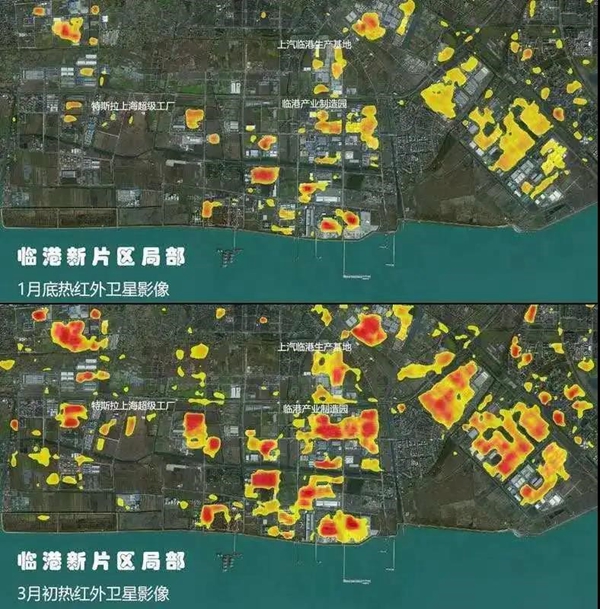 Thermal infrared satellite imagery of Lin-gang Special Area in January (above) and March (below) offers a visual representation of the area's gradual resumption of operations. [Photo/WeChat account: shlgguanweihui]

The Lin-gang Special Area was able to resume work so efficiently because the area's authorities have been proactive in assisting enterprises. 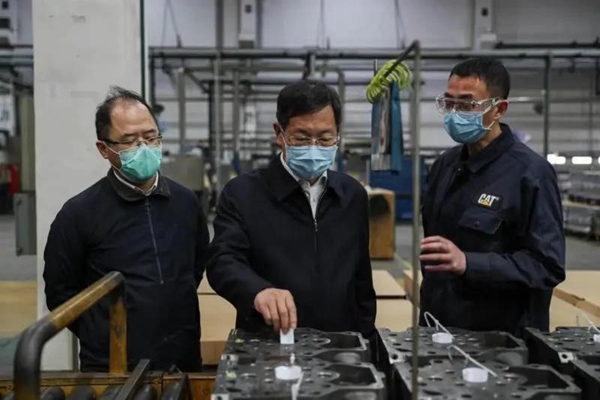 At Mino Tech, which provides intelligent manufacturing production lines for body welding and assembly for auto manufacturers in China and the United States, Zhu suggested expanding via industrial internet development.

The idea is feasible because technology for industrial production, intelligent manufacturing, and other fields is interlinked, a high-ranking Mino Tech employee said.

In addition, a manager at Caterpillar Remanufacturing Industry (Shanghai) Co Ltd said they were having difficulty importing old parts due to governmental limits and policies.

Zhu then suggested they build a factory in the Yangshan Comprehensive Bonded Zone.

"If old parts cannot be imported, you can directly carry on remanufacturing outside customs, and then export them," he said.

He also added that the area could adjust its policies to accommodate the situation if necessary.

Lin-gang Special Area's policies are oriented toward opening-up and innovation. However, some companies are still hesitant to take advantage of them under the current situation.

Therefore, the area plans to focus on helping several specific companies in order to give confidence to other businesses in the area.