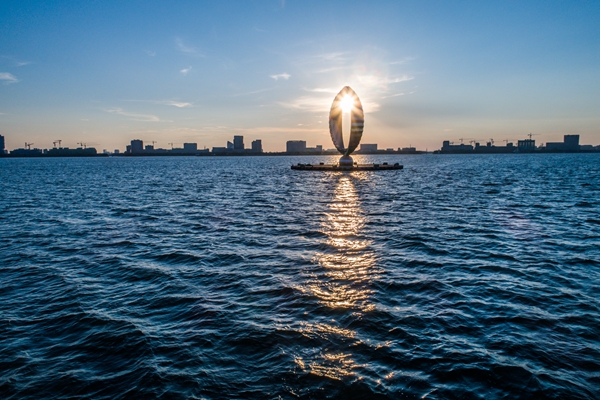 A view of Dishui Lake and surrounding buildings, which are located in Lin-gang Special Area of the China (Shanghai) Pilot Free Trade Zone. [Photo provided to lgxc.gov.cn]

Lin-gang Special Area of the China (Shanghai) Pilot Free Trade Zone will be developed into a first-class business environment with strong influence in Shanghai within three years, according to the municipal government's latest plan.

The Tesla Shanghai Gigafactory, the largest foreign-invested manufacturing project in Shanghai, released its first China-made cars in December 2019. The achievement showed the lightning speed at which the project got off the ground - the laying of the corner stone, production preparation and finally commercialization were all completed within one year.

In the next three years, Lin-gang Special Area will replicate and extend the approval model used for Tesla to all investment projects in the area.

Examination and approval procedures will be divided into two lines and will be carried out simultaneously.

Nine institutional innovations were mentioned in the plan, which would maximize business convenience.

Lin-gang Special Area will introduce more convenient and open policies to attract foreign talent. An electric port visa system will be tried out. Foreigners invited by firms can apply for a port visa online, and will gain access to Shanghai ports with the e-port visa issued by the Shanghai port visa authority.

Drawing from the experiences of other internationally recognized and competitive free trade zones and advanced economies, Lin-gang Special Area will propose a series of reform measures affecting every aspect of business.

To learn more, please refer to the authoritative Chinese version of this action plan.