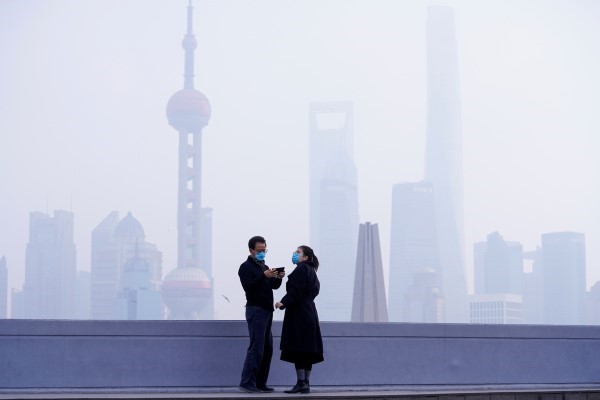 People wearing masks are seen on a bridge in front of the financial district of Pudong, in Shanghai, Feb 3, 2020. [Photo/Agencies]

The measures focus on further opening-up the financial sector, better allocating financial resources, and improving the quality of financial services.

"Pudong, as the financial center of the city, should spearhead the development of the financial sector," said Ding Jianping, deputy director of the Shanghai Institute of the International Finance Center (SIIFC) of Shanghai University of Finance and Economics (SUFE).

As of the end of 2019, Pudong was home to 1,078 licensed financial institutions, 13 financial factors markets, and thousands of law firms, accounting firms, and consulting agencies.

"Pudong has been leading China's economic reform and opening-up. With the establishment of the China (Shanghai) Pilot Free Trade Zone (FTZ), Lujiazui Financial City, Zhangjiang Science City and Lin-gang Special Area, Pudong has developed advantages in areas such as trade, industry, tech innovation and finance," said Cao Xiao, assistant to the director of the School of Finance of SUFE.

Local finance, commerce, market, human resources and education authorities have long been coordinating with each other to provide comprehensive services for financial institutions.

In October 2015, the Shanghai FTZ implemented 40 financial reform measures, allowing foreign-funded financial institutions to establish joint ventures in the zone and hold up to 49 percent stake. Under that policy, Pudong helped facilitate the establishment of a joint venture between JP Morgan and Shanghai Waigaoqiao Free Trade Zone Group.

In 2018, Shanghai FTZ released another 11 measures to further open up its financial sector, allowing foreign shareholders in a joint venture to hold up to 51 percent stake. Pudong authorities helped JP Morgan apply for the establishment of a foreign-owned joint venture.

Pudong has also launched a series of measures to attract skilled workers and help them take up residence in the city.

According to local authorities, Pudong plans to provide 13 million square meters of affordable housing for incoming skilled workers in the next three to five years. Those who are qualified but fail to receive housing will be given a certain amount in subsidies.

"As a foreign bank headquartered in Shanghai, we can see the Shanghai government's efforts to further open-up and improve the business climate,” said Zhang Xiaolei, president of Standard Chartered (China).